Natalie Kunicki, who works as a paramedic for London Ambulance Service (LAS), was watching films in bed with her friend after a night out on 4 March when she stretched her neck and heard a loud ‘crack’.

The paramedic, who usually cracks her joints was left partially paralysed at just 23 when a neck crack caused a stroke by rupturing a major artery in her spine

Natalie, thought nothing of it and went to sleep, but 15 minutes later, she couldn’t move her left leg and fell to the floor when she tried to walk.

The Paramedic was rushed to hospital in an ambulance where a CT scan confirmed she had suffered a stroke.

Natalie’s vertebral artery, a major artery in the neck had burst, as her neck had cracked, causing a blood clot to form in her brain and triggering a stroke. 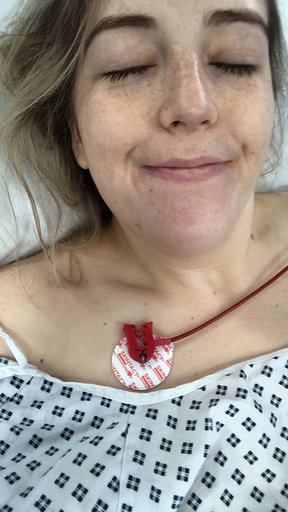 Fortunately, Natalie regained enough movement in her leg, arm and hand thanks to daily exercises and was allowed to be discharged to her parents’ home in Harrow, London, on 28 March.

The young paramedic is now speaking out to warn people of the risks when cracking joints, and to make them aware that strokes can affect you no matter what your age.

“People need to know that even if you’re young, something this simple can cause a stroke. I wasn’t even trying to crack my neck. I just moved and it happened.

“I’m a paramedic and I didn’t ring 999 for 10 minutes because I thought it was too unlikely it would be a stroke when I should have known much better. Every minute more of your brain cells are dying, so don’t ever discount a stroke just because someone is young.
“People need to be more mindful when doing any chiropractic exercises or strenuous gym weights. I was in bed watching stuff with a friend when it happened.

“I stretched my neck and I could just hear this ‘crack, crack, crack’. My friend asked ‘was that your neck?’ but all my joints crack quite a bit so I didn’t think anything of it. I just laughed.

“I fell asleep and when I woke up about 15 minutes later. I wanted to go to the bathroom but I could feel this leg in the bed and I was asking my friend if he could move his leg.

“He told me it was my leg but I was a bit tipsy so I wasn’t taking anything seriously and just thought ‘that’s a bit weird’. I got up and tried to walk to the bathroom and I was swaying everywhere. I looked down and realised I wasn’t moving my left leg at all – then I fell to the floor.”

Natalie completely shocked when she was told it was in fact a stroke, explained:

“When the consultant told me I’d had a stroke I was in shock.

“The doctors told me later that just that stretching of my neck had caused my vertebral artery to rupture. It was just spontaneous and there’s a one in a million chance of it happening.

“I don’t smoke, I don’t really drink, I don’t have any family history of strokes so it’s quite strange it happened to me when I was just moving in bed.

“I was in shock for about three days in ICU. I was a bit of a wet blanket. I didn’t really say much and I wasn’t engaging with anyone. I had no sense of humour.

“I was just completely shut off, trying to compute what had happened. People said I was a bit like a robot and didn’t show much emotion.

“But a couple of my friends from the ambulance service told me, ‘You have a week from the day of your stroke to snap out of this or we will snap you out of it.’

“I was able to have my little pity party for a week but that’s it. They told me, ‘What’s done is done now – just work and do all the exercises.’

“They were fantastic and they would come in and do all the exercises with me. I think if I didn’t have them I would have been in my pity party quite a bit longer but instead I smashed through all the therapy goals.

“I think they did look at me at first like they thought I was just a classic drunk 23-year-old but I told them I was a paramedic and I knew something was wrong.

“They took my blood pressure and heart rate and they were both sky high. Then they did this test where they hold their finger in the air and you have to touch your nose then their finger. My hand went all over the place and I was thinking ‘oh no’. I knew something was going down.”

After being rushed to the National Hospital for Neurology and Neurosurgery, Natalie underwent three-hour surgery where doctors discovered her burst artery. Fortunately, they were able to repair Natalie’s artery with a stent, but they couldn’t clear the clot in her brain but they believe it will dissolve in time.

“I expected to wake up from this miracle surgery and everything would be fixed but my mobility was worse and they couldn’t clear the clot. At the start I couldn’t move my thumb and forefinger. I could kind of move my wrist up and down. I couldn’t lift my arm. I could bend my left leg but I couldn’t wiggle my toes.

“The doctors would do tests – I had to close my eyes and they would touch my left side but I couldn’t tell where they were touching. It was like when you have really bad sunburn and your skin is sizzling. I felt that all down my left side.

“I think I scared my consultant because after I woke up, she came in to ask how I was going – but I told her, ‘You should have killed me.’

It’s a known symptom that patients can suffer depression after a stroke because you lose so much of your independence.

“I had to have a nurse help me shower in a wheelchair. What 23-year-old needs someone to help them shower and wash their hair? It was just a bit surreal.”

Doctors cannot give an exact timescale for a full recovery but Natalie is hoping to be back to work for ‘light duty’ in six to 12 months.

“I was scared at first about being discharged, because my parents’ home has lots of stairs and I didn’t know how I was going to manage, but it’s gone well. I’ve recovered movement in my left side. I can walk but not for more than five minutes. I’m really clumsy. I can’t do up buttons, I find it too difficult. I can feel hot and cold now but I still feel a bit numb.

“Being discharged and at my parents’ is definitely helping with my recovery because I had to do things for myself. I have to get dressed, make the bed and I can go to make a cup of tea. I’m definitely doing something right but it’s slow going.

“It has been strange being on the other side but the ambulance crew who came out to me were amazing. They did a perfect job. They even stayed with me to hold my hand while I waited for my parents and blue-lighted me to the other hospital for my surgery, even though their shift had ended.”

Natalie is eager to raising more awareness of strokes in young people.

“I have been called out to so many people having strokes and they’re always in their 70s or 80s. I have never been to a young person having a stroke. Mine was one in a million but a ruptured vertebral artery is actually quite a common cause of strokes in young people.

“They will be in the gym or doing something quite physical and it happens. Strokes are also quite common in kids. It was a shock for me. I thought as a professional I would have an idea but even I didn’t know. Normally if you’re called out to a young person, you wouldn’t do a test for a stroke.”

Natalie’s brother Michael, 33, has set up a fundraising page to find the funds to help his sister to stay in London and keep her job. “When I woke up from surgery my brother told me he’d set up a fundraising page and all my friends and colleagues have been sharing it. Eighty percent of the donations are from people I work with which means so much. It’s going to be so helpful.

“I really want to get back in my own flat and I really don’t want to have to move back to Australia. I love my work too much and I don’t want to leave them.”